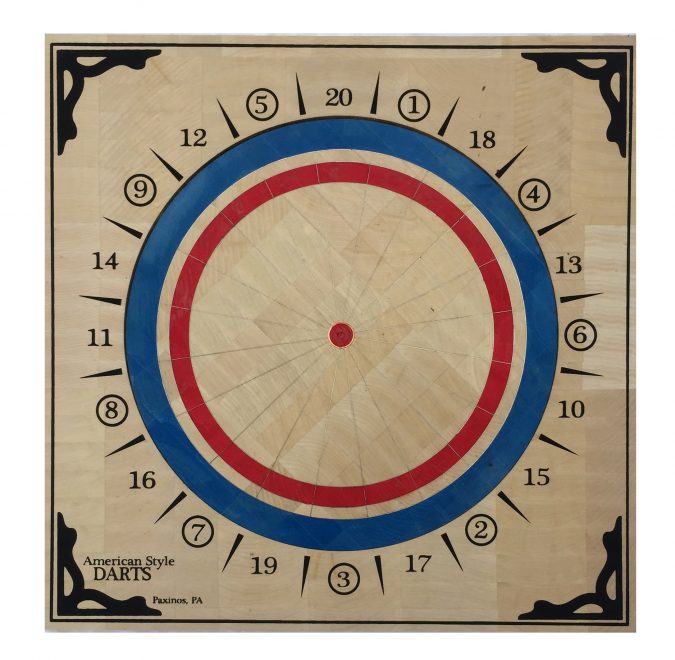 If you’ve landed here looking to buy a board, click on through . . .

Buy an American Baseball dart board.

American boards have been around since probably the 1920’s. They are different from English style boards on a couple of counts. The first is materials. An American board is made from blocks of basswood, turned so that the end grain faces the dart shooter. This allows the dart to slide in between the wood fibers when it strikes the board. When the dart is pulled from the board, the fibers go back in place, and the in a way “heal themselves”. English boards make use of a similar system, using sisal fibers.

The scoring area for the bullseye is different as well. American boards have a circular target in the middle referred to as the “cork”. An English board will have a circle, inside of a second circle as their “bullseye” area. The inner bullseye is worth double the score of the outer bullseye.

Another difference is the wiring system used to cut the board into its pie shaped pieces. English boards often hang a wire cage in front of the board whereas an American board embeds the wires into the wood – drastically reducing darts that bounce out.

I have some early dartboards. In the beginning, makers didn’t take the time and trouble to put the end grain towards the shooter. They would glue up some boards, screen/paint them, and that would be that.

You can see in the “19” that chunks of the board can come right out. So, the end grain idea was a wonderful improvement. Also, older boards might not have wires that separate the innings. This old Dart Shark has lines drawn in. they’re nice, but not as effective as wires for deciding whether a dart is in one inning or its neighbor.

Wood boards can sometimes be referred to as “cork boards”.

This cork dartboard may have an inner layer of wood that the cork is mounted to, and then painted/screened. I had asked Joe Marafino from Widdy about cork boards and his response was a chuckle, and then something to the tune of “we haven’t made cork boards in a long time. they don’t last!”. Judging from the picture, I take his word on that.

In 1935 Charles Widmeier applied for a patent that mentions a replaceable center area. I think that idea morphed into a “rotatable” center area. That idea has gotten some traction, but there are still a LOT of shooters that don’t know a modern board is designed to be able to have the center rotate. I still get about four calls a year from people who are confused that a dartboard is not one single piece of wood, but a center and frame.

Actually, a modern board is not one piece of wood. It’s probably over 100 pieces, all glued up as one measuring somewhere around 22″ x 22″ and 1 1/4″ thick. The “somewhere around” part comes in because with all that end grain those wood fibers are drinking the water out of the air causing them to shrink or grow with the humidity. If they swell too much, it can make turning the center part difficult.

The main game shot on these boards is “Baseball”, where players take aim at innings one through nine, throwing three darts per turn. Each inning has a section where you can score one, two or three points. All points count. After nine innings the highest score wins. It’s not complicated, but it can be confusing because there are several other dart games based on the sport of Baseball.

Dartball is one of them, some players use our board to play “Drive Them In” (a baseball based game), and there’s the common Baseball theme you see on the backs of older boards.

So when we say we play Baseball Darts, it’s true. But, there might be some room for confusion as well. 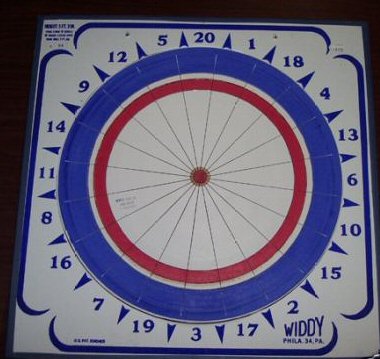 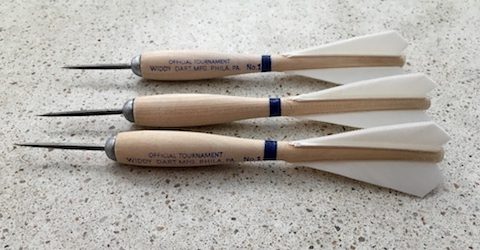 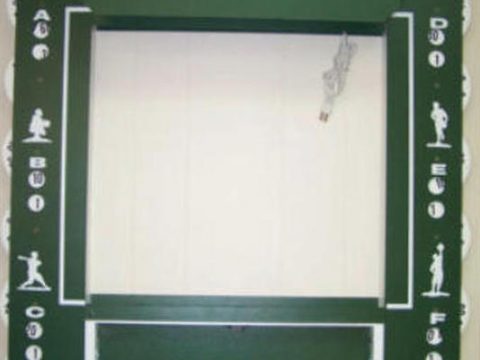