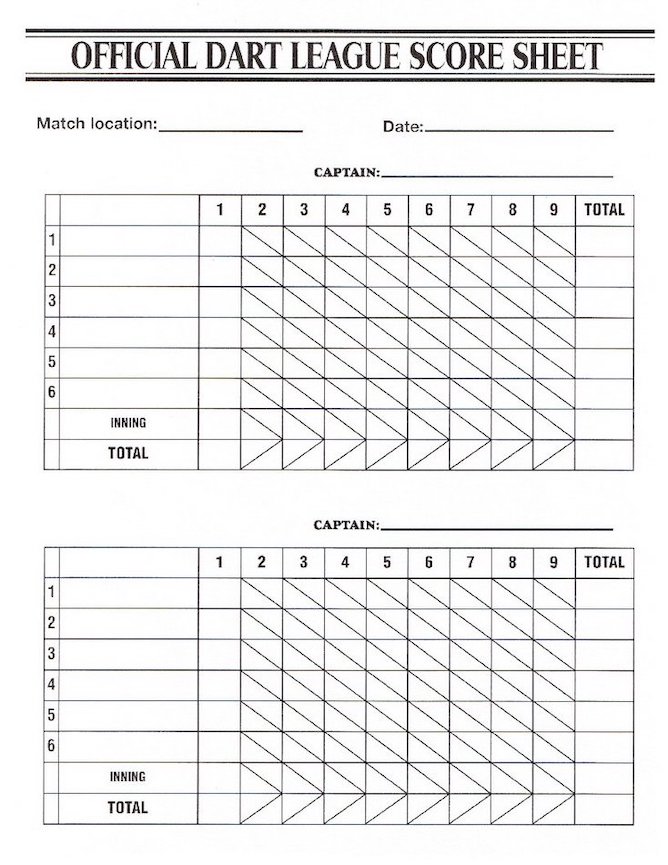 If you are keeping track of the score in a friendly game, any piece of paper will do. Most public dart boards will have some kind of score keeping system right next to the board.

If the game is a tournament game, or a league game, there is usually an official score sheet you can use to keep track of the points. Keeping track of the scores on one of these sheets isn’t difficult, but like scoring a bowling game, it does take some explanation.

Keeping Score in a Dart Game

The players names are filled in on the left. After a player shoots, the scores are called out to the scorekeeper. In the first inning, you simply write down the player’s points for that inning.

Beginning in the second inning, the score boxes are cut in half by a diagonal line. From here on in, the player’s score for the inning is written in one section, and his running total for the game is written in the other section.

This allows us to keep track of what everyone shot in any inning of the game, and also provides a second set of numbers to use in double checking the math. So, we’ll have more accurate scorekeeping, and more detailed record-keeping as well.

You’ll notice that for a score of zero (a “blackout”), the scorekeeper fills in the square, blacking it out.

In larger tournaments the scoresheets provided are double or triple layered, with carbon backing so that several copies are made. Usually each team will get a copy, and one copy will be turned in to the tournament director.

When we kept score for our Two Man tournaments on paper, we used this score sheet:

This scoresheet is designed for use in a 3-Man Dart League. [Submitted by Sauger]

Of course not one score sheet fits all, so I’ve put up an Excel version of the score sheet. You can save it and customize it to fit your needs.

We also have a download for an Excel version of a dart scoresheet with the functions built into it, so when you add a player’s dart score to an inning, the math takes place automatically behind the scenes. Add the player’s score in the white cells, and the shaded areas will keep the tally, including the number of points “Team A” is ahead of “Team B”. [submitted by F. Petruskevich]

We’ve also taken that scoresheet and put it into the traditional “diagonal line across the middle of the scoreBox” format. When using this version of the spreadsheet, enter the shooter’s score for the inning in the upper part of the scorebox. [edited by K. Marinelli]

Scoresheets for Other Games

Here are printable scoresheet for other games shot on an American Style Dartboard.The Game of High Score is similar to Count Up on a pub board. Players shoot three darts round, and the game lasts 9 rounds. Here is a copy of a scoresheet they use:

The Game of Drive ’em In mimics Major League Baseball in that instead of scoring a point with each dart, players place imaginary runners on base. So, shooting a double in the inning doesn’t reward the shooter with two points. Instead, there is now a “man on second” that needs to be “driven home” in order to earn a point for the team.

If you have found this page on Dart Scoresheets helpful, please consider sharing it with others.