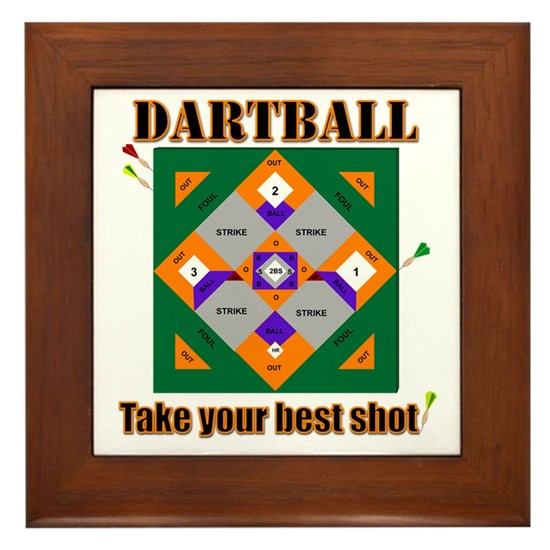 First let me say, again, that I love getting actual letters in the mail. The latest came from Ray H. of Grandview Missouri. He writes that he “would like to know if you have any knowledge of a game called Dart Ball. It was played on a 4×8 plywood with a paper playing field like a baseball diamond.”

Well Ray, yes I have heard of Dartball, and here’s some background on the game . . .

Life magazine ran a story in 1941 the featured dartball, so the game has been around for quite some time. Well, actually the Mon Yough Church Dartball League has been active since 1928. At least one report puts the origin of the first dartball styled dartboard back as far as 1923 when the Apex company began offering them for sale.

Life Magazine noted that Kansas City was a “stronghold” of the sport. Other strongeholds were Philadelphia and Milwaukee. Today you can find Dartball alive and well in other areas, including Wisconson, Georgia and Kentucky.

That being said, not all dart leagues follow the manufacturer’s recommendations. Different leagues will have no “tilt” to the board, and the board height varies greatly.Each board has multiple scoring areas of different colors. The scoring areas reflect the different events in a baseball game. There are sections for singles, doubles, triples and a home run, as well as areas for balls, strikes and outs. The Wisconson Dartball website summarizes the board as follows . . . “All white is safe. All orange is out. Green is foul, grey is a strike.” That sounds simple enough.There are, however, a couple of unique scoring sections that include a “two base single” where the batter is awarded first base as a result of the dart, and any runners on base already advance two bases. There are also sections that result in a “double play” and a “sacrifice out” that would advance the runner.

The game strongly mimics traditional baseball. There are two teams of 9 players competing. Each player’s turn at the throw line mimics a batter in baseball. They can throw until they strike out, are walked, get a hit, or hit into an out. Umpires are used to call the game. Sometimes 2 Umpires per side are used (an Umpire of Darts and an Umpire of Plays are used in the Spencerville PA Dartball League).

The darts used in the game are Apex/Widdy # 2 and come in at a whopping 7 1/4 inches long. They come in both three feather and four feather flight configurations. By comparison, a standard Widdy dart is 5 3/4 inches long.

The distance of the throw line seems to differ from league to league, but 20 to 25 feet seems to be the norm. Also, players are sometimes restricted to a particular throwing motion. For instance, in Wisconson, players must “pitch” underhanded.

There are two chapters dedicated to Dartball in Dan Peek’s book “To The Point, the Story of Darts in America”. In one of them, it is reported that the president of Apex recollects that the sport of Dartball was spread across the country “by Johnny Appleseed types, such as Lutheran ministers who would bring their dartboards and their bibles as they moved from one congregation to the next.”

That quote may bear more than a bit of truth. In looking at the greater Dartball community, many of the active leagues are Church Leagues. And, for whatever it’s worth, Monday Night seems to be Dartball Night across the country.

Although the Washington PA dartball league isn’t a church league, they were featured in the trailer of a Dartball Movie! It looks like the project won’t actually come to life fully, but the trailer is definitely worth the watch!

Another short film clip that you can watch about dartball features Paul Knapp speaking on the topic.

If you’re interested in starting to play dartball, you’ll need a dartball board, #2 darts, a stand, and a lighting system. The boards are available online, or can be manufactured. In an interview for “To the Point, the Story of Darts in America”, Robert Glass from Apex stated that “Every month or so we get a call from somewhere in the country from someone asking for materials. They are usually vague about what they want them for, but it’s not hard to guess that they are trying to make a Dartball board. We don’t mind at all, but everyone thinks they will be infringing on our patent. We don’t care about that, we’ll be glad to help anyone with materials or instructions on how to make a Dartball board at no charge, with no problems.”

The darts are available from Widdy Mfg. The stands and lighting systems seem to be made by each Dartball group. I haven’t been able to find any commercially available.

The above article appeared on our original darts blog. The original comments are as follows . .

1. Author: Leah Borntrager | Date: August 12, 2008 | Time: 9:17 am | I am in charge of activities at Wesley Manor, a retirement community in Indiana. We have a dartball board that was made years ago by a resident. Recently another resident expressed interest in making his own and asked me for the plans to make one. I do not have any design plans for a dartball board. Can you help me with this?

4. Author: Jeffrey King | Date: September 28, 2009 | Time: 12:37 pm | Hello fellow dartball enthusiasts. I wanted to mention that I’ve played ‘dartball’ for over 20 years in a UM church league in Columbus, Ohio. Our board is of a little different configuration, but I’m sure the game is similar. There are 8 teams in our league, and 16 teams in a separate Lutheran league. I can be contacted at golden.retrievers@sbcglobal.net

7. Author: gary schaber | Date: January 9, 2010 | Time: 6:38 pm | I am team captain for Holy Cross Lutheran Church dartball team in the Fort Wayne Lutheran dartball league. This league began play in 1952. I have served in my capacity for 2 seasons also having played for about 10 seasons altogether. I love the game and hope to be playing for several more years as well!

8. Author: wayne pralle | Date: February 26, 2010 | Time: 7:37 pm | I use to play dartball in a church league and at that time there was a business in des moines iowa that sold the dartboard papers that you could staple to your hardboard and replace as needed but that business is no longer and I have not found anywhere I can get these papers, can anyone help me out. Am starting a new league, love the game.

9. Author: gary schaber | Date: April 5, 2010 | Time: 11:49 pm | As a follow up to my previous post,I thought I would let everyone know how our season came out Holy Cross finished in a tie for 2nd place for the 2nd year in a row in Division 2 of the Ft.Wayne Lutheran Dartball League.We also placed 2nd in our season-ending tournament(double elimination)losing both games to the eventual Division 2 champion team Trinity-Lutheran Home 1-0 in 13 innings on a home run and after winning our way back to the final round we lost 7-1 in the last game,if we had won that game it would have set up a winner take all game for the title but Trinity-LH came out hot in that last game and blew us out,that’s just the way it goes sometimes,but we had a good run finishing 3-2 for the day in 2nd place as I mentioned.I hope to be running the team again in the fall,I always have fun with this and just hope to take it a little further next season and win Division 2,the tournament or even both would be great,if possible!

10. Author: Royal Petzoldt | Date: December 8, 2010 | Time: 10:36 pm | We have a Lutheran Church leauge here in southeast Missouri. Cape and Perry counties which make up of 14 teams. This leauge started around the early 1940′s. We play each team once each Tuesday night, and We have three games every week. After the season We have a tournament where We play each team one game. I started to play in 1960. It’s a very good game and a lot of fun for all that play. The board We use is the same as the wisconsin league does. 4×4 foot board 20 feet from the throwing line, and 26 inches from the floor.

11. Author: Bill Morris | Date: April 11, 2011 | Time: 9:09 pm | In wausau, WI we are known as the Wausau Interchurch dartball league. The league was formed in 1935 and we still have 14 teams of 13 churches of all different denominations. Our web site is wausaudartball.com.

12. Author: Robert Dolan | Date: November 26, 2011 | Time: 6:46 am | I would like to have someone contact me about a Church Men’s Dartball League in Centra, Ohio. I am planning on asking our Pastor if we can form a team at our Church, and we would like to particiapate in a Central Ohio Church Leaue. Thank You, and Have a Blessed Day. Sincerely yours, Robert Dolan