This is one of the more popular side events that I saw in action at a Steel Tip tournament. I’ve now seen it at work inside of leagues, where it takes place between the second and third games of the evening.

Players voluntarily purchase a ticket at the beginning of the night. It could be $2, $5, whatever. Their name goes into a hat, and all of the money goes into a pile (or fund).

At a point in the evening, the host pulls a name. That player then gets a chance to shoot darts and win some cash.

The host has a set of poker chips/paper slips numbered from 1 to 20. The player chooses a chip, and whatever number he finds written on it is the number of the inning where he will be aiming.

He will win ONE THIRD of the prize pool for EVERY dart he lands in triples section of that inning. So, if the prize pool is $75, and he lands two triples, he wins $50. The remaining $25 carries over into the next week.

The triples prize pool is resent to $0 only when someone hits a White Horse (or a 9) from the triples line.

Everyone has an equal chance of being drawn to shoot in this format. Another format that I’ve seen is to allow players to buy as many tickets as they like. This favors players with deeper pockets, but also tends to allow the prize pool to grow more quickly.

In any event, the Triples Event is an interesting side event that I’ve seen take place at tournaments and during league play. 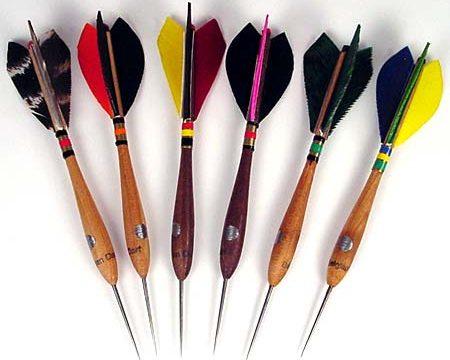 0 367
How to Play Baseball on an American Dartboard