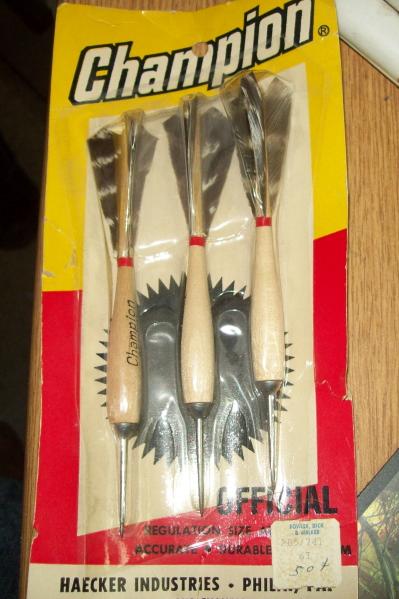 I’ve decided to move “Champion” brand darts to their own page, mostly becuase I’ve been seeing a lot of them popping up on eBay and other internet auction sites. And there seems to be a wide variety of packagings. That makes me think that they were more popular than I realized.

Below is another set of Champions, in a completely different style of box. The first box, with the blue writing seems like a very simple single pass print job. This box below has multiple colors involved, and even now days Apex and Widdy don’t use multi-color printing on their boxes.

I’m not saying this is the world’s greatest box, but they must have been selling enough darts to put some money into the packaging.

And then there’s this packaging, the plastic bubble style that looks to be made for haning on those wire post “shelves” that are attached to pegboards in retail shops of all kinds. This packaging mentions Haeker Industries, of Philadlphia as the manufacturers of the darts.

The darts look a lot like Decos, except they have a stamping on them that says “Champion” and something else I can’t quite make out. The packaging also says that they make Champion Dart boards. I had never seen one of their boards until Pat Blavos sent me some pictures of a board and dart set that he found up in his attic.

I did some digging on the internet on Haecker Industries out of Philly, and there are only really two things to report.

1. They were mentioned in the May 14, 1962 issue of Sports illustrated as having boards for sale (made for them by Dunlop of England) for $25.

2. They made a target for a dart pistol target shooting game “GABBY HAYES CHAMPION SHOOTING TARGET” in the 1950’s. The pistol shot rubber suction cup darts.

So, even though I haven’t heard of them from any living shooters, the Champion Dart line from Haecker Industries seems to have been pretty active in the 50’s and 60’s.

Here are the pictures I got from Pat. The front of the board has some intersting features with the mini-games in the corners and the horse racing image arching across the top. I really do like those little touches that you find on the older boards. 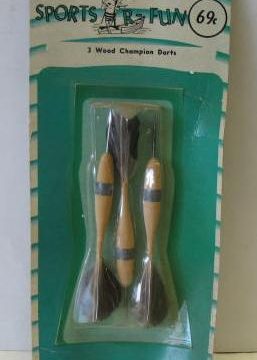 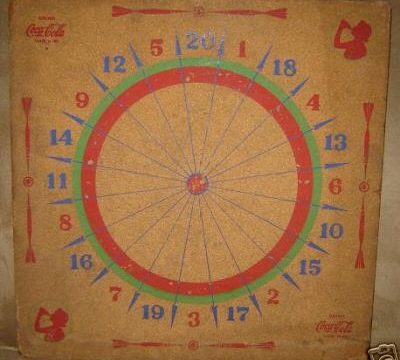 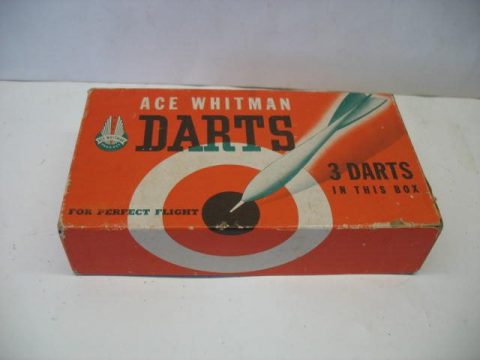 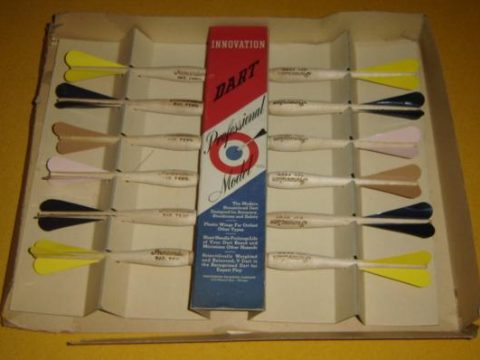