The Pennsylvania State Dart Tournament is a special event. It has been running since 1969. To put that into perspective, the British Dart Organization didn’t start their championships until 1978.

The location for the event has changed throughout the years, starting in Freeland at the VFW. There you could find a dartboard in virtually every cranny of the building. On our first trip we had to park what seemed like a mile away from the place. But hundreds of people went there to shoot, from all over the place.

The tournament was moved to the Butler Fire Co, and then to Treskow PA. From there it went to the Lakeside Ballroom in Barnesville, which was a facility that could accomodate over a thousand shooters and spectators.

It’s currently being held at the Little Run Sportsman’s Club in Tremont.

The Pennsylvania State Dart Tournament stands as the largest American dart tournament that does not make use of “handicaps” or “average caps” for the teams. While that may sound simple, it is not currently commonplace. In most tournaments teams averages are either capped at a maximum allowed average, or teams with a lower average are awarded “handicap points” in an effort to create more even competition.

At States, you need to earn every point by placing a dart in the board. And, players may team up with anyone they choose.

The tournament is held in two stages. Teams begin by shooting on a qualifying date. The size of the brackets has varied over the years. They are currently eight team brackets. What has not changed is that in order to qualify, teams must survive the day with one loss or less. Those that do will have the opportunity to shoot in the finals.

On the final day of the tournament, action begins with the “one loss” teams, and the undefeated teams are moved into action as the day progresses. And eventually, somewhere around midnight a winner emerges.

The teams for the tournament are composed of four shooters maximum. Generally that consists of three starters and an alternate. In some cases scheduling conflicts may prevent players from attending both the qualifying date and the final day. In other cases, starting shooters simply go cold and are replaced in the line up by their team’s alternate.

Many teams do not make use of an alternate shooter.

The game being played is Baseball, or “One to Nine”. It is by far the most common game played on an American board. Matches go to the team that wins two out of three games.

Shooting order is decided by first flipping a coin to see who will throw at the cork first. Darts are thrown at the cork, and the closest to the cork chooses to have their team shoot first or second. At the end of the first game, the losing team chooses whether they wish to shoot first or second. If a third game is necessary, loser of the second game chooses for cork. Cork is shot, and the third game begins from there. This set-up is commonly referred to as “loser chooses”.

Before the very first inning of a match, players have a chance to warm up by throwing three darts anywhere on the board (except for at the 1st inning). They take the line, and declare to the scorekeeper that they are throwing “three away”. After their warm up toss, they retrieve their darts and begin shooting in earnest.

It is a full fledged “double elimination” competition. Teams that lose a game are put into the “one loss” bracket. Matches in that bracket are the same as matches in the winner’s bracket. Not all tournaments are run that way. Now, in an effort to speed up the tournament, many tournaments are using a single game in the loser’s bracket to decide the match.

Each of these teams brings their own flavor to the game. In our area, when a player toes the line the room usually becomes quiet with a sense of anticipation. Our first time at States it was a bit of a surprise when the opposing team was “chattering it up” for their shooters at the line. They were clapping their hands, and encouraging them to “nail a red”, land a dart “right on top”, or “fill her up!”.

Not only does each team bring something to the game, but each of the shooters approach the board differently. You can spend a lot of time just taking in the different techniques that players have developed for shooting darts. Some are unorthodox, some look downright awkward. But many are highly effective.

Of course if you don’t regularly shoot in tournaments, having your team’s name called over a PA system when it’s your turn to go to board nine is a thrill. The size of the event creates a certain excitement. That’s something that newer shooters should experience. You’re still standing at the line, aiming for the red, but now it feels different.

Probably the number one comment I hear from shooters returning from their first attempt at States is the “they make it look so easy”. I think that’s an important thing for a new shooter to see. Sometimes people put up barriers in their minds. And when you see others break through your barriers with ease, sometimes those barriers get erased. With the number of skilled shooters at States, you can see what it takes to hit a 50 or even a 60 game. The mystery of shooting well can disappear. You no longer marvel at high scores because you can watch them happen. And, hitting them begins to look easy.

Dart History: Another unique thing about States is that it seems to house the sense of history about the game of American darts. There is a display section set up at the tournament where you can find old newspaper articles recounting past scenes from the tournament, and American darts in general. All of the names of past tournament champions are posted so you can see who the top teams and shooters were throughout the years.

They even have a Wall of Fame that honors top shooters and sponsors of the sport of American darts. You can get a sense of the people who have made an impact on the game, and carried the sport forward during their time.

The tournament is held at the beginning of the year, with qualifying dates starting in January. 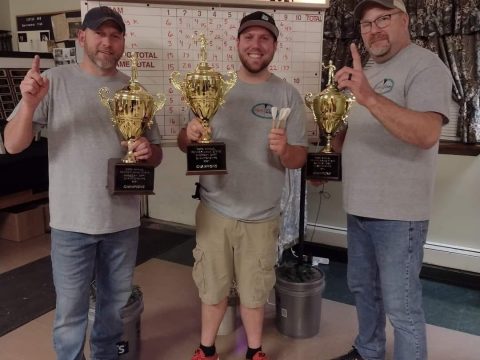 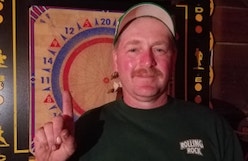