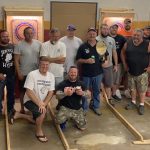 The Natalie Fire Company opened its doors Saturday afternoon, and in walked a collection of dart shooters from far and wide, all ready to compete in the singles event known as “The Big Dog”. After the strangeness that was 2020, it was nice to be back to something familiar.

Darts were in the air at 1pm, and there was no waiting for the tough match-ups. Dave Habowski met Nick Peck, Timmy Johnson faced off against Kenny Johnson, and Kyle Mack took on Jason Kroh, all in the first round.

Five boards were set up for tournament action in the truck room, with three more in the bar area for practicing and side games. As players were eliminated from the tournament, those boards began to see action that lasted throughout the day.

With 28 matches in the books, Joe Haganey, Kyle Mack, Robert Buck, and Ken Johnson were still undefeated. Todd Hainsey, John Hainsey, Skip Rosenquist and Nick Peck were alive in the One Loss bracket.

In the second “it’s gonna be a long car ride home” game of the day, the two cousins John and Todd faced off with John coming away with the victory. In the first match-up of cousins Kenny bested Timmy Johnson.

As the tournament moved on, Joe Haganey met Robert Buck with the catbird seat at stake. Haganey took the second game and the match in a 50 to 54 contest.

Ken Johnson met Skip Rosenquist for the “3rd Place or better” position in the bracket. Ken won game one 51 – 50, and threw a second 51 game to take the match.

Since he would be coming out of the One Loss bracket, Robert Buck would need to beat Joe once to knock him down a peg, and once again to take the title.

Robert took the first game in 11 innings. In game 2, Joe tossed a 61. Robert won game three with a 52, setting up the final match of the day.

Once again game one went into extra innings, this time with Joe coming out on top. Haganey took game two 49 – 48, giving him the match and the tournament!

I believe Jason Bower and Bradley Danson share the “from far and wide” award for the day, making the trip in from the Commonwealth of Virginia to shoot.

John and Todd Hainsey brought the Clearfield county brand of darts into the house, adjusted to having to “toe” the board, and battled their way into the Final Eight.

Skip Rosenquist made the drive up 81 from Lancaster and notched 5 wins before finishing in 4th Place for the day.

Nick Peck wins the “despite my best efforts” award because his 54 was the highest game put up in a losing effort, with Kenny Johnson ruining the party by throwing a 57 for the win in that game.

Video of select matches will be appearing on the American Darts YouTube Channel in the coming weeks.

In 2022, the date for the Big Dog will be returning to April. 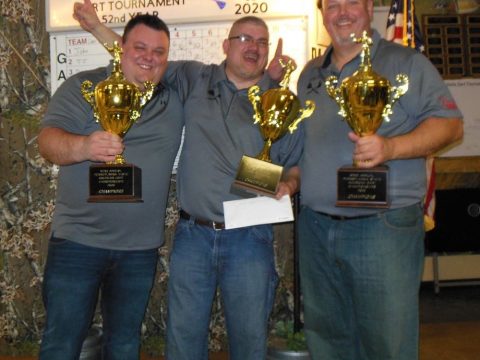