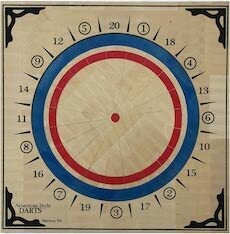 An American Style dartboard made of endgrain basswood (although it is sometimes called a "cork" board). The wires separating the target areas are embedded flush with the board to reduce bounce outs. Scoring areas of the board are arranged in the American Style, consistent with the American dart game of Baseball played at A.B.D.A. tournaments.

The board measures 22" x 22" x 1.25" and is designed to fit the traditional American dart cabinets made by Widdy, Darto and Prodart. The center of the dartboard rotates, prolonging the life of the board. Both sides of the board are playable.

Manufactured with qualities consistent with boards previously produced by Deco, Darto, and Widdy. For use only with American darts (wooden barrels with turkey feather flights) such as those made by American ProDart and Widdy.

Popular games played on this board include "baseball darts" (also know as "One to Nine"), "Six Eleven Cork", and "Triple 13 before the inning". These boards are most common in the coal region of Pennsylvania, and throughout the Philadelphia and Mid-Atlantic areas.

Save this product for later
Display prices in: USD